The global award was launched in February 2021, with the aim of recognising, celebrating and publicising the positive innovations, improvements and actions being made on dairy farms on a global scale. The judging panel was particularly impressed with Fen Farm’s ingenuity and thorough research into each of its sustainability projects as described below. 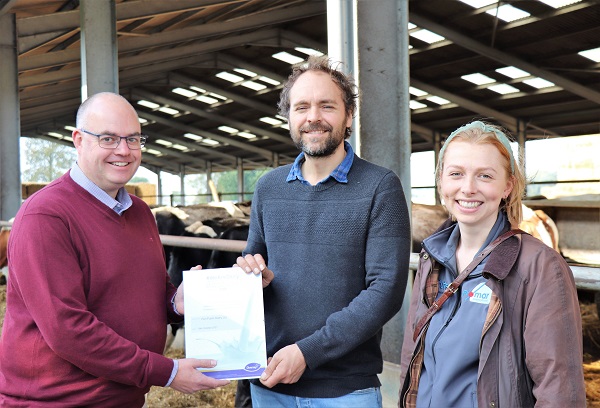 You’ll find sustainable processes everywhere you look at Fen Farm, in Flixton, Suffolk. Their sustainability journey started in 2011, with the installation of solar panels. In Summer 2019, they laid 1500 metres of water pipes into a bed of sand beneath a new shed, and January 2020 saw the installation of heat exchanges on compressors throughout the farm.

Six months ago, in October 2020, a new straw burner was also installed on-site to further reduce electricity usage on the farm, providing three different ways to increase the temperature of the water for all hot water and washing needs in the cheese, butter and milk production areas.

The floor begins to heat up in early Autumn, once the cows come in, taking a few weeks to reach a temperature of approximately 45 degrees C at the bottom of the muck, which will remain constant throughout the winter. The natural warmth of the muck, straw and cows heats the sand under the yard to over 40 degrees C. This in turn heats the water running through the pipes to between 33-46 degrees C.

The water enters the pipes from a borehole at one end of the shed, filling up the 1.5km length of pipe. From here, it travels 50m across the yard to the 1000 litre tank in the main parlour building. They have found that it is more efficient to empty this tank completely each time, rather than a constant movement of water, reducing the amount of heat lost when the water travels through the insulated pipes. 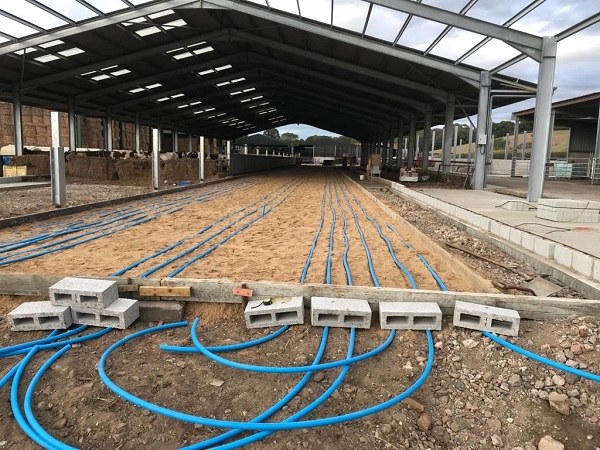 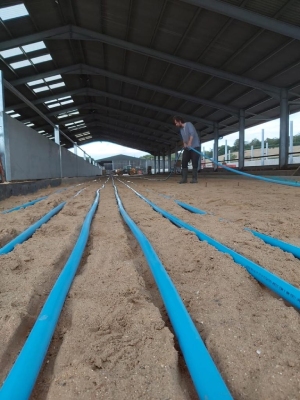 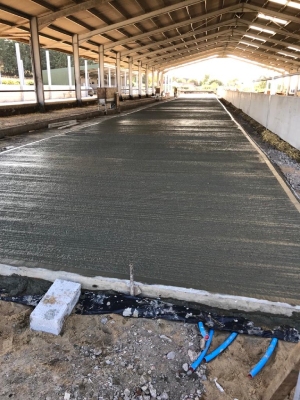 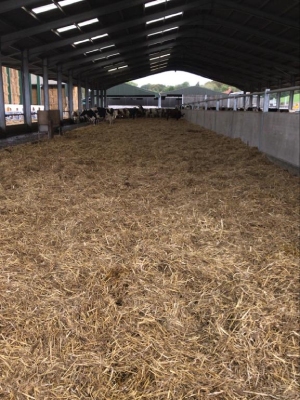 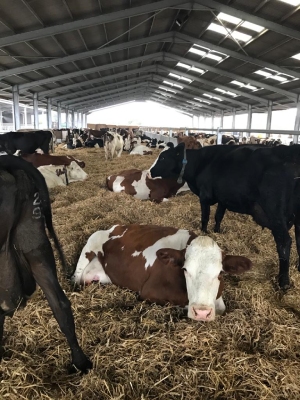 In January, Jonny saw how much heat the compressors were creating, and with it, an opportunity to harness that heat. Powered by an ice bank, the fridge units cool the milk that comes from the parlour to the milk tank; gas is put under pressure to create this ice, to take the heat out of the milk to cool it down. Once it has collected the heat, the gas would usually be chilled back down again, but instead, this gas is diverted through a heat exchange with the 1000 litre preheat tank, using this heat to take the water from +/-30 degrees C to 60 degrees C.

The straw burner uses one straw bale per day (all baled on the farm) to heat the 44,000-litre water tank in the straw burner shed. The water is circulating constantly to reach 90 degrees C, and with the use of another heat exchange from the straw burner, Jonny estimates only a 2 year pay-back period on the investment. This too is used for cleaning the parlour, as well as supplying hot water to the cheese and butter production facilities on site. This facility also provides future-proofing for the business, with a larger potential capacity to provide more heat as it is needed.

Jonny has always been ahead of the curve when it comes to thinking outside of the box and wants to prove that, as farmers, they can operate sustainably, aiming for complete self-sufficiency as an end goal i.e. baling their own straw for use in the burner, with the potash going back onto the land.

He believes that businesses across all industries should be doing the right thing and that consumers are paying more attention to this than ever before. With a conscious effort to stay away from fossil fuels, instead opting for straw and wood, which are both resources on the farm, Jonny is operating innovatively, using new ideas that don’t mean digging into the ground. He believes there are so many ‘small wins’ that farmers can implement than ever before, including planting more trees and installing ‘HydroGen’ electrolysers on farm vehicles, which claim to reduce fuel consumption of at least by 10% and reduce emissions of at least 65% (Jonny has recently fitted one to the JCB telehandler).

As Jonny is selling to the public, he believes it is even more important to have clear carbon credentials, even going as far as committing his carbon usage reductions on social media, therefore holding himself accountable. He believes that “Step 1 is understanding it, and step 2 is implementing it,” so also now employs Emily Evans, a research student from the University of East Anglia, part-time on the farm. Emily is keeping a close eye on energy usage, and helping them to gain an accurate understanding of their carbon output.

“It didn’t feel right going into the future without considering how much energy we are using, and not doing anything about it,” says Jonny.

“I had read about all of the things that we have now implemented on-farm and thought there was so much to be gained from them, both from a business and efficiency point of view, and also for my conscience.”

The next step at Fen Farm is the installation of a larger solar panel system to add to those already in place, utilising the roof space, as well as looking at battery power storage to avoid putting in a substation across the road from the farm.

The impact the idea has had on sustainability

As the business uses hot water in the cheese and butter production buildings, as well as the parlour, office building, houses and other buildings on the farm, significant savings have been made. The most energy exorbitant part of heating water is getting it from cold to warm, and they now rarely need to use electricity to heat water at all, with this option now serving as a back-up option now that the straw burner is in place.

In terms of investments, the new piping installation under the shed floor cost approximately £2500 and saves in the region of £1,800 per year in water heating costs. The newly installed heat exchanges cost £3000 per unit (total 2 units), and the straw burner cost £35,000. Overall, the total project, including installation, building work and piping, has cost the business £120,000.

Since all three installations have been in use together, Fen Farm has saved £4,000 in electricity fees in the last quarter alone, now costing them only £15 per day to heat water for use across the business.

The ‘Think Cow’ initiative at Rodway Farm (Bridgwater and Taunton College) promotes a shared mantra that puts the needs and well-being of the cows first.

find out more
Image
blog
Farming and the Circular Economy

Farm innovation is being seen with new GIS technologies, robotics, chemicals, and sensors that measure everything from harvest quality to genetic variability.